At 45, Jake Gibb is almost certainly at his last Summer Games. And yet the four-time Olympian offered to give it up for the remote chance that Taylor Crabb could have the experience even once.

"At the end, Jake and (coach Rich Lambourne) told me it was my decision to make. They'll stick by me whatever I want to do," said Crabb, who tested positive for COVID-19 and withdrew from the Olympics so that Gibb could replace him on a two-person beach volleyball team.

"I was not going to risk this opportunity for Jake and Rich," Crabb told The Associated Press. "This is Jake's last year. This is everything he's worked for. I want him to go out on top. This is our goal coming into it. And I want to see him fulfill that."

Although he was vaccinated, asymptomatic and had provided the required negative results before boarding his flight, Crabb came back positive during intake testing on Sunday after arriving in Tokyo. He continued to submit samples, hoping for a negative test that would have allowed him to return to the Games, but he withdrew on Thursday night, hours before the deadline for the US governing body to submit its roster. 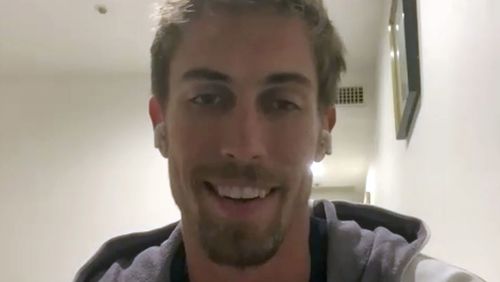 Alternate Tri Bourne joined Gibb on the sand Sunday night for their first match, a straight-set victory over Italy.

"Taylor is my brother. I love him. We've gone to battle for five years together. And so it's hard," Gibb said after the 21-18, 21-19 victory over skyball specialist Adrian Carambula and Enrico Rossi.

"But we're ready to fight together, and we have Taylor with us. We honestly feel that," Gibb told reporters after the match. "I feel like it's unfair for the rest of the world: We've got 3-on-2 out here."

Crabb told the AP from his quarantine hotel in Tokyo that Gibb offered to forfeit the first match and even the second one, on Wednesday, on the chance that the extra time would allow the Olympic first-timer to provide the negative tests that would have allowed him to play.

Two losses to start the Olympics almost certainly would have doomed their chances of moving on to the knockout round. But there also was no guarantee that Crabb would have gotten out of quarantine in time for the third and final match of the round robin.

"There was a risk of me still having dead virus in me and testing positive," he said. "And if there was a one per cent chance that I would test positive and ruin this moment for our team, I was not going to let that happen." 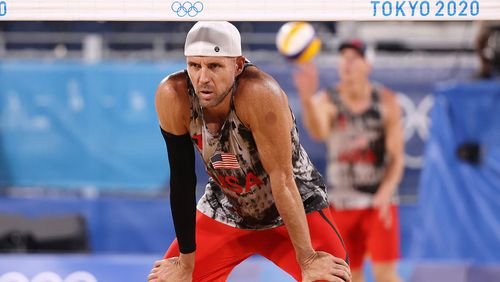 Instead, Crabb has been in his hotel room for more than 23 hours a day, FaceTiming with friends and family until he will be allowed to board a plane, perhaps as early as Tuesday night. He also has been helping his former team scout opponents.

"It still makes me feel important and part of the team, which is huge for me," he said. "Because if I didn't have that, along with the devastation of not being able to play with them, that would have been worse for sure."

Kevin Durant had a shot. Then another about 20 seconds later.

Jrue Holiday had one. So did Zach LaVine and Bam Adebayo.

The U.S. had five attempts on the pivotal possession of its latest basketball failure and came up empty on all of them.

That not only doomed the Americans to an 83-76 loss to France on Sunday night, but showed their problems might last well beyond their Olympic opener.

Because if a team can't shoot, it's not going to win.

"The ball goes in or it doesn't," US coach Gregg Popovich said.

It sure didn't fall much Sunday for the US The Americans finished at 36 per cent overall and were 10 for 32 (31 per cent) from three-point range.

Durant, who holds a host of US scoring records and should break more in this tournament, was one for six on three-pointers. Jayson Tatum was one for five. Damian Lillard was three for nine.

These are All-NBA players, shooting from a three-point arc that's closer than they're used to.

"Sometimes you make shots and sometimes you don't," Popovich said. "It's not a question of what aspect of the game that you win or lose. It's accumulation of everything that went on during the game." 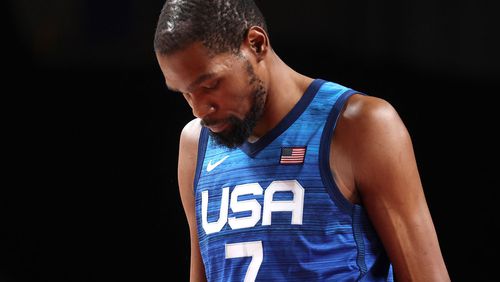 The Americans undoubtedly had a difficult preparation for these Olympics. Their exhibition schedule was reduced from five to four games after Bradley Beal was placed in health and safety protocols and ultimately couldn't to travel to Japan. Another player had to be replaced when Kevin Love pulled out with injury.

And with Holiday, Khris Middleton and Devin Booker only joining the team Saturday after missing training camp while playing in the NBA Finals, nearly half the players missed some or all of the warmup run to the Olympics.

That means the Americans have to simplify their playbook, at least at the start. There are few sophisticated offensive sets because they simply haven't had time to learn them.

But that shouldn't cause shooting to suffer. And they can't afford it to at this point, knowing they don't have much else they can call upon after such little time together.

Booker missed a three-pointer that could have extended a two-point lead with 2:09 remaining. Evan Fournier's three-pointer gave France the lead before the Americans misfired on multiple chances to regain it.

Durant got good looks at the basket on both of his threes during the five-shot possession that started with his miss with 44 seconds left. He was off on another with 25 seconds to go and Holiday missed one to end the possession.

"We gave them five chances in a row," France centre Rudy Gobert said. 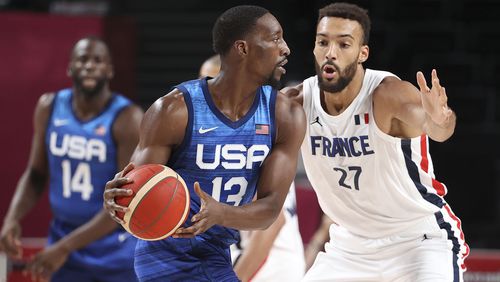 Durant, with two Olympic gold medals and an MVP award from the 2010 world basketball championship, never got in a rhythm while battling foul trouble.

But he wasn't particularly sharp during exhibition games, when the Americans were beaten by Nigeria and Argentina. Coming off such a strong finish to his NBA season, it's an untimely slump for the US.

The good news for the Americans was that Holiday was better than they could have hoped after arriving late Saturday night — this after partying with the Milwaukee Bucks following their NBA championship on Tuesday.

He seems to fill a pair of needs for the Americans, providing steady point guard play while able to defend even more physically than in the NBA.

If a few more guys pick up at his level, starting in the Americans' next game against Iran, the Americans think they can be a much different team than the one that wilted late against the French

"We still have a chance to accomplish our goal," Holiday said, "and being consistent is the best way to do it."